There is a beautiful image near the entrance of one of the chapels at Saint Meinrad, where I attended seminary. You have to go out of your way to find it; it’s not in a conspicuous place. It’s in the basement, near the door to the oratory – a chapel that rarely gets used.

Mary is seated on a donkey, holding the child Jesus who is two or three years old. Joseph is leading the donkey. In one hand, he holds his walking staff. In the other, he holds the hand of Jesus. Or, rather, Jesus is holding onto Saint Joseph’s finger as he stares at him in admiration.

The title of the painting reads: “The Hand of the Humble Joseph Guides That of the Almighty.”

Another one of my favorite images at Saint Meinrad is located in the seminary chapel. You don’t have to go so far out of your way to find this one. But it’s still not in a conspicuous place. You must look for it. It’s in the back of the chapel, in a corner, near the confessional. 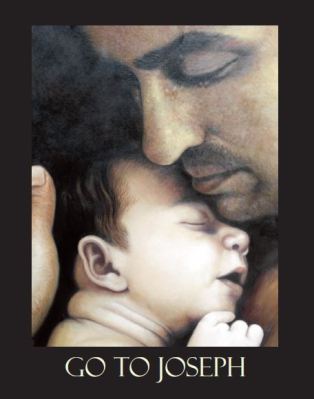 This image depicts a close-up of a young father in his early twenties. He has black eyebrows and a five o’clock shadow. His eyes are closed as he cradles his infant son against his bare chest. His son is sleeping, resting his face and bare chest against that of his father. The image contrasts the strength of the father with the weakness of the child. The child is completely dependent on his father, and the father is committed to protecting his son.

The caption under this image reads: “Go to Joseph”

Framed on the wall next to this image of Saint Joseph holding baby Jesus is a Seminarian’s Prayer to Saint Joseph. It reads:

We honor you, Saint Joseph,
for the tender care and fatherly wisdom
that marked your holy life
as you taught your son Jesus
how to be a man.

Look on us now, we pray,
as we seek to become men
in the very image of your son.
As you guided him to become fully one like us,
so guide us to become more and more like him,
who is our brother and our Lord,
now and forever. Amen.

Saint Joseph is a model of true meekness. He never speaks a word in the Scriptures. He doesn’t have to. He is a man of great strength. He is a carpenter. He works with his hands. He provides for the needs of his family. He protects his family. Under his watch, no harm will come to them.

Meekness is not weakness; it is gentle strength.

Come to me, all you who labor and are burdened, and I will give you rest. Take my yoke upon you and learn from me, for I am meek and humble of heart.

Brothers and sisters, let us take up the yoke of true meekness by following in the footsteps of our Lord who learned meekness in his humanity from the example of his foster father Saint Joseph.

Place yourself under the yoke of Christ who is meek and humble of heart.

Submission to Christ the Lord does not mean being a wimp, a coward, or a pushover. It means knowing what, or rather who, your life is about. It is knowing who you are, or perhaps who you are not, in relation to Christ who is God. It means knowing that God is God and I am not. Placing yourself under the yoke of Christ means believing that his vision for how to live our lives is what will bring us ultimate happiness, freedom, rest, and joy.

Brothers and sisters, if you are not under the yoke of Christ, whose yoke are you under?

I invite you today to cast off the yoke that has you enslaved and take up the yoke of Christ.

Cast off the yoke of self-doubt, of self-loathing, of self-deprecation and take up the yoke of your true identity as a son or daughter who is infinitely loved by the Father.

Cast off the yoke of individualism and caring solely for your own needs and take up the yoke of your true identity as a brother or sister to those around you.

For his yoke is easy, and his burden light.