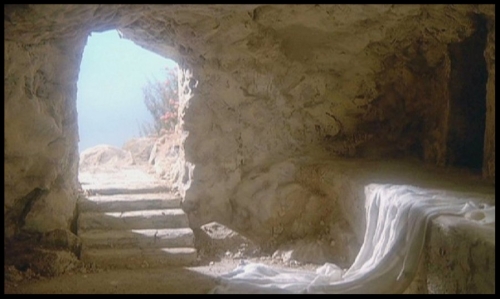 The early Christians had a greeting that they shared with each other.
One would say: Alleluia!  The Lord is Risen!
And the others would reply: Alleluia!  He is risen, indeed!

Alleluia!  The Lord is Risen!
R:\ Alleluia!  He is risen, indeed!

Resurgence: increasing or reviving after a period of little activity.
re – again
surgere – to rise

Resuscitate – to breathe new life into a body that was dead.

The Resurrection changes everything!

Jesus had new life but so did those disciples who ran to the tomb.
How could anything ever be the same again?
How could they not speak of what they had seen?

For them, Resurrection led to mission. So too for us.

They were witnesses to the Resurrection.
So are we.
Their story is our story – it has been passed down to us.

Perhaps we need a resuscitation of our belief in the Resurrection.

Perhaps we need to come again and see the tomb,
to go to that place where we think we know what we will see…

Brothers and sisters, come to the tomb.

Come and see the place where he was laid

Come like Mary Magdalen,
Mary who went to the tomb expecting one thing but finding another,
finding that it all had been true.

Come to the tomb and you will be astounded at what you find, or rather at what you don’t find.

Run to the tomb

Run to the tomb.

Run to the tomb and see for yourself.

Run to the tomb and you will find that Jesus is not the only One to be resurrected,
to be given new life,
to be raised to new life.

Last week we watched the burning of the 800 year old Notre Dame Cathedral.  I visited there three years ago.  The Cathedral contains a reliquary, and inside the reliquary is the Crown of Thorns.  THE Crown of Thorns that Christ wore on Good Friday.

We have all of these relics, these remains from the crucifixion, that remind us of the promise of the empty tomb.

When the fire was discovered, the chaplain of the Cathedral ran inside and rescued the Crown of Thorns and the Blessed Sacrament.

Even in the midst of that Cathedral that became a fiery tomb, there is the promise of rebuilding, or new life, of resurrection.

Run to the tomb.

My brothers and sisters, the Resurrection changes everything.
And we are the witnesses.

Come to the tomb.
Run to the tomb.
See for yourself.
Then run back to the others.
Tell them what you have seen.

Alleluia!  The Lord is Risen!
R:\ Alleluia!  He is risen, indeed!

One thought on “The Resurrection Changes Everything. Run to the Tomb!”