It is good to be with you again. As you may know, three weeks ago I left for a pilgrimage to Spain to walk “el Camino de Santiago,” or “The Way of Saint James.”

The tradition holds that, after the ascension of Christ and the outpouring of the Holy Spirit upon the apostles, St. James evangelized Spain. In the 9th century, a shepherd discovered the tomb containing his bones and, in time, a Church was built over the site.  It became a popular pilgrimage site, and there are paths beginning in France that lead across Northern Spain, ending at the Cathedral in Santiago.  This became known as the Camino, which is Spanish for “the Way” of Saint James.  Many, many pilgrims walk the Camino each year as a pilgrimage.  Some start in France and spend 4-5 weeks walking the 775 kms to reach the Cathedral.  Our group started in Sarria, Spain, and walked the last 115 kms in 6 days.

When we arrived in Sarria, we had a rest day before we started walking. I remember walking through town.  It was an unsettling experience.  I didn’t understand the language very well.  The surroundings were unfamiliar.  I wasn’t entirely sure where I was on the map.  The Cathedral seemed so far away.  I was making this pilgrimage with a group, and only for 6 days.  I began to think of people who made this pilgrimage by themselves.  It seemed like such a daunting undertaking.  If I’m honest, I have to admit that some fear set in – fear that would have discouraged me from starting out on the journey had I been alone – fear that would have taken some faith and courage to overcome.

Faith is the realization of what is hoped for and the evidence of things unseen. Faith led Abraham, our father in faith, to leave his home and all that was familiar and to set out for a far-away land that the Lord had promised to give him. He had the strength and courage to leave because he had faith in the God who had made the promise.  Even though he could not see where he was going, he had a real faith that he would arrive in the land that was promised to him.

The next day, when we started out on our pilgrimage, we came across the first of many granite markers we would see. These markers had a yellow arrow that pointed to the path and indicated how far we were from the Cathedral.  As we walked, we kept our eyes open for the next marker.  They were everywhere. They were the evidence of our destination, the Cathedral, which we could not see.  By following the path that the markers laid out for us, we had faith that we would realize – that we would come to see – the Cathedral that we hoped that we would see.  The markers with their yellow arrows gave us faith and hope that we were going in the right direction. Faith is the realization of what is hoped for and the evidence of things unseen.

A pilgrimage is not always easy. Sometimes things don’t go as we had planned. Sometimes there are blisters – painful, nasty blisters.  We walked 14 miles the first day.  At the end of that day, my friend Deacon Jerry had 4 blisters on the bottom of his feet.  He rested his feet that afternoon, applied some moleskin to them, and set out with us the next day.  We walked another 14 miles, and Jerry had a couple of more blisters at the end of that day.  He rested again and applied some more moleskin.  Day 3 was a shorter walk – only 8 miles.  By the end of that day, Jerry was in agony.  He could hardly walk.

When we got to the hotel, someone in our group asked the clerk if there was anyone who would be able to look at his blisters and treat them properly. The clerk contacted a massage therapist who often visited pilgrims on the way.  Ludi arrived at the hotel in minutes, took one look at his feet, and said he needed to have a doctor look at them.  She then drove us to the hospital in her own car and then waited with us for over an hour while they treated his blisters.  She then drove us back to the hotel, and adamantly refused to take any money for her time.  “No, no, no, you are my friends.”

Pope Francis has said that “Faith is not a light that scatters all our darkness, but a lamp that guides our steps in the night and suffices for the journey.” In other words, faith does not light up the whole path so that we can see the destination, but it is just bright enough to help us see the next step we should take.  Faith does not remove the darkness of suffering, but it accompanies us in the darkness.  The light of Faith shines brightly when the darkness is great.  In the hour of trial, faith brings light.  The name Ludi means “light”, “one who is full of light.”  Ludi was, indeed, a great light for us on the Way. 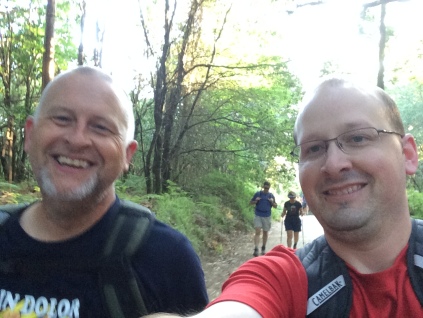 Deacon Jerry had to skip 2 days of the pilgrimage, but was able to rejoin us for the final day. After 6 days and 76 miles of following the yellow arrows on the granite markers, we finally reached the Cathedral in Santiago.  They yellow arrows had pushed us forward on our pilgrimage, and by following them, one by one, one after another, we reached our destination.

Brothers and sisters, life is a pilgrimage. We are journeying toward a destination – the heavenly Jerusalem – the Kingdom of Heaven where Christ, the premier pilgrim, has gone before to mark the way for us.  He blazed the trail and has left markers along the path so that we can follow where He has gone.

He has left us yellow arrows in the Commandments that show us how to live – where to walk – so that we do not stray from the path that leads to eternal life. Wide is the road that leads to destruction and narrow the way that leads to the Kingdom of God, but the command of the Lord is clear, giving light to the eye, so that we can see the path we should follow.

He has left us the Eucharist – the Mass – as the Memorial of his Sacrifice to nourish and strengthen us on our journey and to keep us on the path to eternal life – the Memorial which we do in remembrance of Him who made us the great promise: “I am going to prepare a place for you…” Our faith in what God will do is strengthened when we remember what God has done.

He has given us friends and family – fellow pilgrims along the way – some of whom are ahead of us – who know the way because they can see the next marker on the horizon when we do not yet know where we are going.

Life is a journey. Life is a pilgrimage.  There are hills and valleys.  There are blisters on our feet.  There are fellow pilgrims along the Way.  There are markers pointing out the way we should go even though we may not yet see the destination.

Faith is the realization of what is hoped for and the evidence of things unseen. Faith pushes us forward on our pilgrimage. 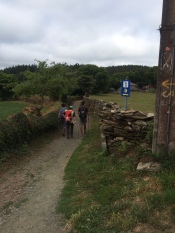 Have faith, take the next step, and look for the next marker.

And when the journey is over, we will have a great story to tell.

The main altar inside the Cathedral

The tomb of Saint James in the crypt of the Cathedral